4 movies and the closing party on Saturday. Here we go:

First up, a silly, trivial, and very very funny mockumentary--or should I say "hock-umentary" (answer: I should not)--PUCK HOGS. Taking the thesis that hockey is the soul of Canada, the filmmakers follow a team from a very minor league. The Puck Hogs are perennial losers, and are now so old that league controller Irv Mason (Colin Mochrie in a striped and polka-dotted bow tie) is retiring the team at the end of the season. Unless, of course, they actually win the championship. But of course that won't happen, because the evil Ice Holes have won for 4 years running. So of course now you know what will happen. But there's plenty of good drunken, gross out fun on the way, including a urinal cake eating contest (best line: "I shouldn't have had that second one!"). The scrappy losers never really "come together" like in a traditional sports movie, they just sort of bumble their way through the season, getting into the playoffs on a 3-way tie, and bumbling their way through winning by default (seems one team can't hold their urinal cakes). And the team captain and one good player (other than the fiery Russian goalie) learns a lesson about life and what's important, but who gives a crap about that? Oh yeah, and the worst hockey player ever of course gets his redemption and learns to overcome his fear of corners. Very funny, if you like intentionally dumb funny.

Then it was time to go to Finland for a much smarter and almost as funny comedy, THE HOUSE OF BRANCHING LOVE. Juhani and Tuula are getting a divorce (ironic because he's a family therapist). But they do have a wonderful house, so they decide to share. They just need a few rules, and most important is the rule about not bringing over "guests". But they both break that law, in horrible and horribly funny ways. And it gets kind of dark, as Tuula's estranged mother runs a brothel where Nina (the lovely Anna Easteden, who was there for the screening) has run away and is hiding out with--of all people--Juhani's brother. And when Juhani hires her to be his pretend girlfriend (no sex, just to make Tuula jealous) and then they actually do fall in love, things get even more hectic. And when the gangsters looking for her track her to the house things really break loose. Oh, and I haven't even mentioned the cops trailing the gangsters who are convinced Juhani is somehow involved in the mob. Hilarious movie of adult subjects played by very childish adults.

And then for a lead-in to the big closing night gala screening, I chose another romantic comedy, ANYONE YOU WANT. The film opens on a young, businessman talking on his cellphone. From the corner of his eye he sees a disheveled but pretty homeless girl eating an apple core out of the trash. He follows her, sees her steal a book, and tries to give her money, but she refuses it because he "doesn't really want it." Something is off here. She's homeless, but well versed in literature to the point that he admits she's smarter than he is. Anyway, we learn his name is Stirling and her name is Amy, and they will magically meet up again tomorrow (although their names will change). And each time they meet, they go to a costume/vintage clothing shop and get new costumes and play out new fantasy scenes. But as little bits of reality enter in--mostly in the form of the nursing home calling about his dying father--we start to learn some things about the true nature of their relationship, and especially that he's the way more fucked up one. I won't ruin it with spoilers, but it's an engaging, funny movie that draws you in to a couple's fantasy world and then takes a huge turn about 2/3 of the way in.

An after just a little time at the VIP Soiree, I headed off to the California for the closing night gala. Lots of words, award winners were announced, but my favorite part as always was all the filmmakers getting on stage and getting a standing ovation. And then finally a movie.
MOTHER is a thriller drama from Korea. It opens with an old, sad-looking woman in a field. Suddenly she starts dancing (still with a sad look on her face). Flashback to her with her mildly retarded adult son. He has always had trouble, but has always been a good kid. So it's a surprise when a local girl is found murdered and all signs (e.g., a golf ball with his name on it) point to him. To the authorities it's an open-and-shut case, but she won't accept it. So she sets out for a little amateur sleuthing and uncovers secrets about everyone in town--and he remembers secrets about her. A puzzling but mesmerizing opening, a mystery, some shocking scenes of violence, and a bizarre ending that explains that opening scene. In other words, it's a very Korean movie. And it's a pretty good movie, but at 128 minutes it's too long for an audience that's really thinking about getting plastered at the closing party. Would've worked a lot better midway through the festival.

So, speaking of getting plastered at the closing party, I stayed at the party (at South First Billiards Club) until I was kicked out at 2 am. Highlights of the party--drinks, meat on stick, drinks, hanging out with Kurt Kuenne (DEAR ZACHARY and some shorts that have played at Cinequest. He didn't have a movie in Cinequest this year, but he was around visiting for a day), drinks, posing on a motorcycle with Chris Garcia, drinks, finally finding the back room where the cool kids were hanging out at a table about a half hour before closing, drinks, somehow getting free pizza, drinks, and all the alcohol.
Here's a picture of me on that motorcycle. We inspire envy because we are total fucking bad-ass mavericks. Or rather, I'm a total fucking bad-ass maverick and he's a proud daddy teaching me to ride my first motorcycle without training wheels. That kind of destroys the bad-ass maverick vibe: 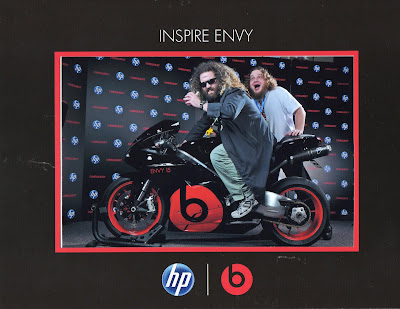