After staying up partying until ~4:30 am (with the help of Daylight Savings Time...grrrr....) I was still up at 10 am for the first Stella in the VIP lounge before heading off to IMITATION GIRL. It's a beautifully lyrical story of two girls, who are kind of the same girl, and who are both leading an artificial life. One is an alien. As in, a spaceship landed in the desert of the American southwest, black ooze came out, and took the form of the first person it saw--the cover girl on a porn mag. That girl is Julianna Fox (at least, that's her stage name) and she's desperately trying to get a break and act in more respectable roles. The alien version has to learn the basics of her new body--how to eat, drink, everything about life, and a kind family of Iranian immigrants take her in and take care of her. Her basic naivety is a stark contrast to real Julianna's world-weariness. And then they start seeing each other in the mirror. The whole thing plays out like a dream, but with gentleness, grace, and love that never judges its characters. Instead it offers humanity a valuable gift--an outsider's perspective.

Then I skipped a movie in favor of resting up...and drinking more in the lounge.

And then for some laughs, with the mockumentary KING OF THE BELGIANS. Narrated by the cynical English director Duncan Lloyd, it starts as a travelogue of King Nicolas II of Belgium traveling to Turkey for a diplomatic ceremony. But while he's there, there's word of a domestic crisis, possibly bordering on civil war. So he has to return home. But then a solar flare knocks out air travel communications and their cell phones. So with his small entourage and the documentary crew, they have to go through a series of wacky adventures, lost in the Balkans, trying to find their way home. Totally hilarious.

And then, after another drink or three in the lounge, it was finally time for the closing night film. But first, they showed a few of the short film jury winners.

CARD SHARK: The story of a little boy playing poker with his goldfish is still hilarious.
HISTORY OF MAGIC: ENSUENO: This animated journey of a girl biking through West Texas is stll hilarious--although I saw it at Indiefest, not at Cinequest.
PERFECTLY NORMAL: This documentary of a high-functioning autistic man with a strong imagination shows his struggle but also his successes at creating a stable life. Powerful and moving. And I hadn't seen it before, so that was really cool. (I have a lot of Cinequest short film screeners to catch up on.)

And then they brought back one of my favorite things from Cinequests past. They invited all the filmmakers who were still present up onto the stage so they could all get a standing ovation (although, they needed to improve their communication--some of the filmmakers who were up in the balcony were sort of caught by surprise.) They announced a few more of the jury award winners, including my new friends from PAINLESS winning the New Visions award (tied with PROM KING 2010, and they were both great movies so I can't complain about that.)

And then finally, the closing night film.

THE ZOOKEEPER'S WIFE is based on a true story and directed by Niki Caro (WHALE RIDER.) Dr. Jan Zabinski (Johan Heldenbergh) and his wife Antonina (Jessica Chastain) are custodians of the Warsaw Zoo. And they've done a great job, but the Nazi invasion throws a wrench into everything. First, the zoo is bombed and many of the animals run away (so yeah, at one point there's a tiger prowling around Warsaw.) Second, the zoo is under the control of chief zoologist Lutz Heck (Daniel Bruhl) In the beginning, he insists he doesn't care about politics, only about zoology. And he has a crazy idea to bring the extinct aurochs back to life through a specialized breeding program. But, of course, he's also a Nazi and is certainly prone to abusing his power to get what he wants...like Antonina. But the more important plotline is how Jan and Antonina work with the resistance to smuggle Jews out of the ghetto into the zoo (hiding them under the garbage they use as animal feed) and then on to safety. It's the sort of amazing story that you'd be inclined to dismiss as Hollywood fantasy (especially the ending,) except for the fact that it really did happen (although I wouldn't be able to speak to some of the particular events.) Anyway, a nice, uplifting film to elevate the end of the festival (and I'll refrain from commenting on any lessons it might give us for fighting fascism today.)

And then off to the closing party at the Hyatt. More snacks, lots of drinks, a melted cheese fountain, a  silly video with a great example of how not to drive there (both in terms of drinking and not keeping your hands on the wheel.

Well, the only problem with that party was last call was some time around 11 pm to midnight. And a heck of a lot of us still wanted to party. Luckily I planned ahead, for an after-after party at the Fairmont, where we once again stayed up until about 4 a.m. And a great time was had by all! 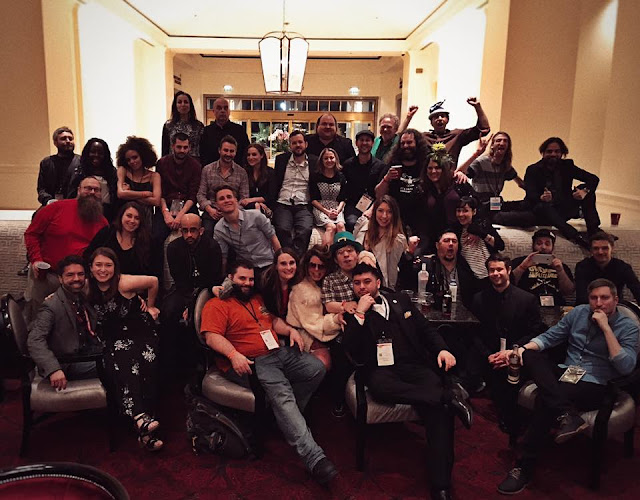 Thank you everyone for a great Cinequest 2017!