Jason shows you how to see everything at Indiefest

The 13th Indiefest starts tomorrow night. For those who don't know, this is the festival that started it all for me. Back in 2002, I saw there was something called Indiefest playing at the Roxie Theater (and a few other locations, but I found out about it because I followed what played at the Roxie). I bought a pass, and planned to see as much as possible. In fact, by planning the schedule correctly I realized I could see everything--and I figured that's what you're supposed to do, so I did. The rest is history, and this year I will attempt to (for the 10th year in a row) see every movie at Indiefest.
However, this year there's a little wrinkle. There are a couple of special events: On Saturday, February 12, Peaches Christ is hosting a screening of SEED OF CHUCKY at the Victoria, with Chucky's bride Jennifer Tilly and Chucky's creator Don Mancini. Sounds awesome. Then on Monday, February 14 Indiefest is reprising LOVE BITES: The 80's Power Ballad Sing-along. I did this last year, and it was a heck of a lot of fun--waving lighters, whipping my hair, and getting really, really drunk.
Now the casual observer would say, "Awesome! They don't play on the same night, I can see both!" However, it's not possible to see both of them and see everything else at Indiefest. And so my dilemma. Below I've shown two possible schedules--one for seeing every movie plus SEED OF CHUCKY, and one for the Power Ballad Sing-along. Click on the images for full size. Gray rows indicate time slots where I have a choice.
A quick review shows I have until Friday, February 11 at 9:15 before these schedules diverge. So I don't actually have to choose now. But for now, I'm learning towards SEED OF CHUCKY. Peaches just puts on a damn good show.
Anyway, see all y'all at Indiefest! 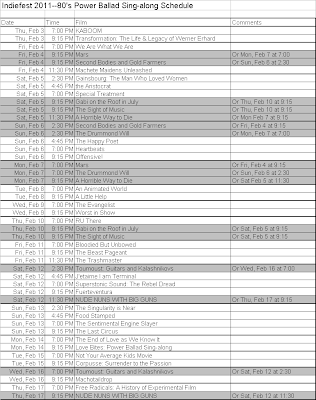 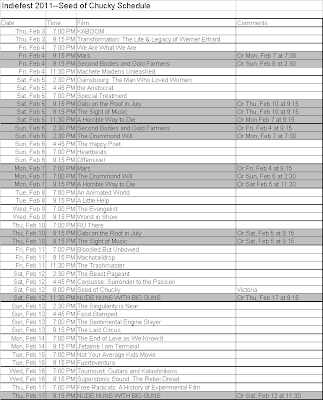 Posted by puppymeat at 9:52 PM