I'm not really that interested in piling on Bill O'Reilly's patently absurd argument that the tides can't be explained and therefore are proof of God's existence (or for that matter, his apparently odd observation that tides requires communication. Is he claiming that the only way water can move around in a regular, predictable manner is if someone is communicating with the water? Or was his "no miscommunication" statement an attempt at poetic language?) I can refute it pretty quickly:
But what I really want to talk about is the response. For all the 'Ha ha! BillO doesn't know the Moon exists, derp!' and 'High school science students know how tides work, LOL!' I haven't seen anyone respond (not that I've searched all that hard) with a satisfying explanation of why there are two tidal cycles every day (if you doubt that, spend 24 hours at the seashore watching the tide come in, go out, come in, and go out...or just peruse any tide table). A facile explanation like 'the Moon exerts a gravitational pull on the Earth, raising the water levels while the Earth rotates underneath' would only explain one tide a day. You see...because the Moon is only on one side of the Earth at a time...because there's only one Moon orbiting the Earth. Anyway, the typical high school science student probably can't explain two tides a day, but a typically weak "explanation" looks like this: 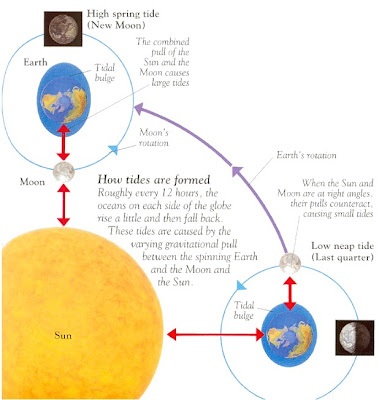 I don't know the original source, I plucked this off a Fark.com thread which, in typical fashion, immediately devolved into childish name-calling.
The problem is this diagram does a horrible job of explaining the two-tides-a-day phenomenon. The picture on the top seems to suggest either that there are two Moons (or the Moon revolves around the Earth twice a day?) or that the Moon is responsible for one high tide and the Sun is responsible for the other. I've already dismissed the possibility that there are actually two Moons. The Moon revolves around the Earth every ~27.3 days, not twice a day. And if the Sun were responsible for the second high tide, it would be at noon (Sun directly overhead) every day. It isn't, the assertion that the Sun causes the second high tide every day is absurd (the alignment of the Earth, Moon, and Sun does determine how high and low the tides are every day, though. The Sun has a very much secondary effect).
The text is not much more helpful either. I quote:

Roughly every 12 hours, the oceans on each side of the globe rise a little and then fall back. These tides are caused by the varying gravitational pull between the spinning Earth and the Moon and the Sun.

What the hell? Did this just bring the "gravitational pull [of] the spinning Earth" into this? Okay, the rotation of the Earth has nothing to do with it's gravitational field. Or at least, the Earth would continue to exert a gravitational pull even if it wasn't spinning. The rotation of the Earth is important in the tides, as the Earth rotates under the two tidal bulges once every day, leading to the two high tides per day at a given point on the Earth. But this seems to suggest that either the spinning of the Earth creates its gravity, or that the spinning of the Earth is somehow responsible (e.g., through a centrifugal force**) for the second tidal bulge. The problem with this is obvious--the Earth rotates around its axis, and the centrifugal force is roughly equal no matter which side of the Earth you're on. There's certainly nothing about the spinning of the Earth around its axis that would preferentially increase the centrifugal force on the side opposite the Moon.
However, centrifugal force is part of the answer. For the full answer, I have to refer back to a deliberate and probably undetected error. I have referred to the Moon either orbiting or revolving around the Earth at least three times so far. However, that's not absolutely correct. The Moon doesn't orbit the Earth--in fact, the Earth and the Moon both orbit the common center-of-mass of the Earth-Moon system (this is the classic two-body problem.) That center of mass is actually inside the earth, about a quarter of the way from the surface to the center of the Earth, and on the side facing the Moon. The Earth and Moon orbit this common center once every lunar period (~27.3 days). So while the Earth is rotating about its axis every ~24 hours (ignoring the small difference between sidereal and solar time, which is unimportant in this explanation), it's also wobbling about this center-of-mass point every ~27.3 days. This orbit also imparts a centrifugal force on the surface, and since the distance from the center-of-mass to the surface of the Earth opposite the Moon is greater than the distance to the surface nearer the Moon, the centrifugal force is greater on that side. And this centrifugal force creates a second tidal bulge on the side of the Earth opposite the Moon. Ta daaaaaa!
For anyone still reading this, I want to assure you that I didn't have a political reason to write this. Nor do I have a philosophical motivation to wade into the Atheism vs. Religion debate (I know what side I'm on, and am not all that interested in arguing about it). Nor am I trying to prove I'm smarter than everyone else (I'm lucky that this was covered in my physics classes at college, and that it stuck in my brain). My only point is that if you're going to mock someone for not knowing how something works, you better make damn sure you know how it works, or you're going to look mighty foolish when someone else corrects you.
No...that's not it, either. That's part of it, but my real point is "Isn't it cool that something you thought was so simple is actually kind of complex in a way you haven't thought about before?" So I guess if your answer is "No" then my work here was for nothing. Sorry for wasting your time.
*Science can explain the tides on some level, although of course if you dig deeper there are more fundamental questions. You can explain the tides if you accept as given concepts of gravity and inertia (as well as the rather remarkable fact that gravitational and inertial mass are exactly the same), but if you get down to what causes gravity, mass, momentum, inertia...well, pretty quickly you get into some of the hardest cutting edge areas of both theoretical and experimental physics. This aspect of science--rewarding the curious mind by uncovering three new questions in response to every answer--is the very aspect of scientific inquiry that antagonists use to "stump" science and prove how little we really know (as if abandoning scientific inquiry with a shrug and a "God did it" somehow means you "know" more).
**For you high school science students and teachers who just freaked out that I referred to the centrifugal "force" (which isn't a real force, but a pseudo-force) when I should have instead referred to centripetal acceleration...get a life. When you live in an accelerated reference frame, "pseudo-forces" have real effects, and the math works out the same whether or not you refer to centrifugal forces.
Posted by puppymeat at 8:20 PM

So you're saying the tide bulge on the other side of the Earth to the moon is due to all the extra mass on that side owing to the earth moon total mass system ..and the suns pull is added as well ..hmmTrying to figure out the extra low tide on the Bay in Melbourne ,which in a couple of hours will be followed by an extra high tide..We've recently been exposed to a full moon (with the sun lighting the moon beyond the earth..aboutAugust 5) and this spring or king tide is happening.Is this a monthly thing or does it have something to do with the moons elliptical orbit (all orbits are elliptical I'd guess) and now the moon is closest ..and this is coupled with the new moon ,full moon configuration ..think we need a real diagram explaining all factors ..
Great contribution by the way