Three more movies last night, let's get to it.

First off was the Mexican coming-of-age drama How Could I Not Love You?
(Como no te voy a querer). Hugo's a huge futbol fan, cheering for his local Pumas team with a group of hooligans. In fact, he dreams of someday playing for them. His family and his girlfriend Julia have other plans. They want him to study, get an education, and have a good career (instead of driving a bus like his dad). He wants nothing to do with that, preferring to pay a hooligan friend to "fix" his grade. His laziness especially causes friction with his sometimes abusive father. Especially because his father drives a bus and every week the hooligans hijack a bus to go to the Pumas game. I suspect he'd be okay with Hugo just being a soccer fan, but it's really rolling with the hooligans that upsets him.

When I first saw this, I thought it was just okay. It's well put together, with some fine acting, but nothing I haven't seen before. The themes--young love, family obligation, cycles of abuse, learning (too late) from the mistakes of your father, etc--are all things that are very common, universal themes in movies (probably in all art). But as I think on it more this morning, there's a level of realism that puts it a little notch above. It explores all those themes, but wraps none of them up cleanly. It's as messy and complex as real life. Well done.


So then, after a quick appearance at the Vivid nightclub for the official VIP Soiree, I was off to the fabulous California Theater for The Birth of a Nation. Now I must join the ever growing fraternity of film reviewers who have to reconcile the technical brilliance of this film with it's abhorrent subject matter. First for the brilliance. D.W. Griffith practically invented editing as we know it today (him and Eisenstein). The Birth of a Nation was the first "blockbuster" film, and the first to establish feature films as the standard filmgoing experience. In a time when people went to nickelodeons (i.e., paid just a nickel to get in) to see 20 minute 2-reelers, he unleashes a 3+ hour 12-reeler and people lined up to pay $2 each. 40 times the average movie rate. That's like charging $400 to see one film today, and people did that (you and 2 friends could see everything in Cinequest with a film and forum pass for that price!). And still today, the story moves along, and everything flows with a dramatic purpose. There can be no doubt that this was not just a breakthrough for its day, but dramatically (but not thematically) still holds up today. And it was the highest grossing film today until another Civil War/Reconstruction epic surpassed it--a little flick called Gone With the Wind.

Interesting, I noticed that I just raved about its technical brilliance without ever mentioning the plot. Reminds me of all the book reviews of "Lolita" that praise the language without ever mentioning it's about pedophilia. Here's the capsule summary--A northern and southern family are friends. The Civil War tears them apart. Reconstruction is even worse, as carpet-baggers and the newly enfranchised Southern black voters "crush the Southern Whites under the heels of the Southern Blacks". Finally, the Ku Klux Klan is formed to fight for the supremacy of the Southern Whites, finally ruling the day. The Union is reunited symbolically with two marriages between the Northern and Southern families.

Okay, now you should understand the moral abhorrence side of this. I can't be a Griffith apologist. This was not just a product of a different time and place, the racism isn't incidental it's intentional and the entire political point of the movie is White Supremacy. When it premiered, the fledgling NAACP protested the film, and still protest it today. And they should--it is still used as a Klan recruitment tool today, in fact its premiere spawned the creation of the modern Ku Klux Klan (the original Klan had pretty much died out, and the new Klan was about hating everyone--Jews, Catholics, etc.--not just blacks). Now I wasn't alive in 1915 when the film premiered, so I can't speak directly to the state of race relations in the U.S. at the time. I know they were much worse than today. But I get the sense that while white supremacy wasn't the radical, insane, paranoid, fringe position it is today, that Racial Equality wasn't such a radical idea, either. This was a time when we had a serious debate in our country (for several decades) about racial equality, and Birth of a Nation solidly and intentionally (not incidentally or obliquely) came out against it. There's no two ways about it, and it sickens me. That's all.

Now I'm looking forward to Intolerance next Friday. Hopefully even more impressive and a little better on the morality side.

Oh yeah, and Dennis James rocked the mighty Wurlitzer organ, as he always does!

Anyway, after all that I needed a drink and a samurai flick. The drink came courtesy of the Mosaic lounge (formerly Paragon) in the Hotel Montgomery. Sadly, since changing from Paragon they somehow got rid of any bartender who can make a decent martini (okay, in fairness I only had one. Maybe there's another bartender there who can make one).

Anyway, the final film was Samurai Avenger: The Blind Wolf. It was freakin' awesome. A low budget B-movie mashup of a spaghetti western and a samurai epic. Of course, these two genres naturally go together, just ask Akira Kurosawa (and that's the last time I'll compare this to a Kurosawa film). This "Sushi Western" is the desert quest of a blind man looking for vengeance. 8 years ago, a horrible criminal named Nathan Flesher raped and killed his wife, forced him to gouge his own eyes out, and then killed his daughter. He survived, trained, and is out for revenge. There are 7 assassins between him and his goal. Kill each one in turn, then kill Nathan Flesher. He gets some help from the mysterious Drifter (Jeffrey James Lippold, who was in attendance and had girls in the audience swooning over him). Crazy fun with witches, samurai C-sections, zombie warriors, and hypno-boobies! Yeah, hypno-boobies!

And that was Friday night at Cinequest.

Oh yeah, I saw my pass! It still exists, and is getting passed around. I saw there were a number of comments, and I'll have a big task transcribing all of them at the end (especially if this is just what I got in 3 days). Here's a little blurry sneak peak of the first page of the notepad: 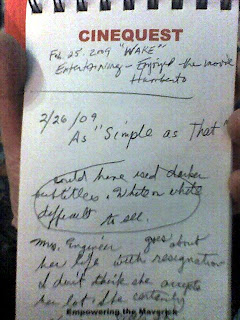 Thank you everyone who has written in the notepad so far! And also feel free to e-mail me your comments on the movies. That will get them up online much earlier.

Anyway I'm off to more movies in just a bit. You probably won't read much more from me for the rest of the weekend (except on my Twitter feed). I have a massive 7 movie day today, 5 more movies tomorrow, and I'll have almost no time to write until Monday.
Posted by puppymeat at 7:21 AM

I didn't think much about it but when I read this entry, I see you went to Vivid! Coincidence or Cinequest maverick spirit at work?

Tera Patrick at Vivid had nothing to do with Cinequest. The CQ VIP party was over at 7 or 8. The later night "watering hole" (open to everyone, not just VIP) was Eulipia.