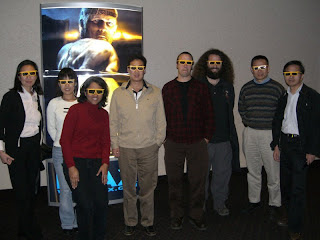 As for the movie itself, it's big, loud, technically impressive, and a good amount of fun. All the scenes are beautifully rendered, and if nothing else it's fun to look at. It takes a lot of liberties with the original poem (as best as I can remember it, I should re-read it), but when you have to balance "strict fidelity to classic literature" vs. "more naked Angelina Jolie"...well, you know what wins. It also takes a lot of liberties with the boundaries of PG-13 (this really should be an R, I think the MPAA was confused because it's a cartoon). As far as the look, the sets and monsters are more impressive than the characters. Technology has come a long was since "Final Fantasy: the Spirits Within", but we're still in the Uncanny Valley.
Anyway, when we got out it was about 5 pm, and the sun had just gone down. So I was free to fall off the apple cart, as it were. We had dinner reservations at Stacey's at Waterford. It's famous for being Scott "Dilbert" Adams' restaurant. He co-owns it and writes jokes on the menus. This was my first time at either of their two locations, but it's a fairly high-class but casual, fun establishment with some great food. And they take pride in being able to make any changes to any dish to satisfy you (e.g., take meat out for vegetarians, etc.) I know I was pretty much starving, but the food was delicious. I started with the complimentary bread, of course. Nothing special but nice and soft with a good crisp crust. Then we got a couple orders of fried calamari for an appetizer--always a good thing. Then I had the house salad, which was also good (although next time I'd ask for it with a little less dressing). And finally the main course. I ordered barbecued boneless beef short ribs, which came with steamed veggies and mashed potatoes. The ribs were as tender as the mashed potatoes. The phrase "melts in your mouth" is tossed around too often these days...well, you get the idea. It was really, really, really good. And for any veggies out there, they do have veggie options. After all, Scott Adams is a vegetarian.
Anyway, my stomach had shrunk enough at that point that just that sort of average sized meal put me into a good food coma. Or maybe it was the two glasses of Chianti (nice, a little sweet for my tastes) and the martini (perfect). Luckily I planned ahead and had a ride home. Where it was still relatively early (~8 pm), but I just laid down on my couch, watched dumb TV, and sat in stomach-stretching agony/ecstasy (there should be a word for that combo..."agstasy"?) until I crawled off to bed. This morning, I was back up to 214 lbs. I was that full on only 2 lbs. of food? Excellent!
Posted by puppymeat at 7:26 PM

Ummmm. Gaaaah. Staceys. Did you know that Scott Adams has a rare brain disease that made it impossible for him to speak for like a really long time? Also, this is a test to see if my "nickname" came through.

Somthing is goofy on this screen. Dadmaniac overwrote some of the other text. 2nd try.

I did know about that. Because he wrote about it in his blog, which I read. Which means I don't have to buy his new book of his blog entries.

Oh yeah, and your nickname works.

I went to see this in IMAX 3-D as well. Let me start by saying that there are 2 reasons that the MPAA may have not rated this R. 1. Ratings are incredibly subjective, and honestly when we live in a country that is totally uninterested in real war and carnage, and has turned a blind eye to it for quite some time, do we really have the right to rate anything? It makes me sick to think that parents care about what content is in a movie that they have the freedom to see before their own children can see it, while other people's children get blown up so they can continue to drive big SUV's. So in general we probably shouldn't rate anything until we show that we actually give a shit about human life and values. 2. The MPAA are a bunch of idiots. I mean they don't even know their own grey areas. For example, remember when they wanted to make The Original Transformers movie PG-13 because the words shit and damn come up in it and Optimus Prime dies. Sigh.... Anyway, it's a pretty fasicist in general to rate media in a country with "freedom of speech". The point is that they have no idea what to rate anything, they just try to do a litmus test on the public and rate accordingly, as far as I can tell. We're saying that we have values on one hand with crap that isn't that important like a movie that you have to choose to see, just not when we're overseas actually killing people and being killed. In short fuck the MPAA. Anyway, the movie itself was pure eye candy. Let's be honest there wasn't a ton of substance to make the movie from, so I was willing to let a lot of things go, but with so little substance I'm still not sure how they made it so long. I mean really this should have been 1 hour and 20 minutes tops. I know that I'm going to get shunned for this next thing, but I could have done with less Angelina Jolie. She's just kind of creepy at this point and not too attractive. Sure she's not Phyllis Diller ugly yet, but she's just freaking creepy man. So yeah a good role for her, she just could have been less almost naked more often and we still would have gotten the point. the point being she's evil, blah blah blah. So again, I didn't expect much of a story. I didn't get much. I got a ton of eye candy. It was too long. Overall though I'd still give it a 6 out of 10. The CGI has really improved since FF The Spirits Within. Soon we may just need voice actors which is cool because most big hollywood personalities kind of suck anyway.

Baceman, I more or less agree with your rant about Beowulf and about the rating system. Crispin Glover made an interesting point when I saw him yesterday. He pointed out that the corporate self-censorship actually has as much (if not more) to do with multiplexes as the ratings system. Ratings are all well and good in that some artists (like Glover) want to make movies that children shouldn't see (like cripple porn). But even if it's rated NC-17, it won't play in multiplexes because of fears that kids will buy a ticket to a different movie and then sneak in. So really, if you want to promote edgy adult art, protect the single-screen movie houses, which have less fear of playing such movies.