EASY STREET (1917): Charlie Chaplin has been chased by cops so many times, but this time he is a cop, and has to bring the giant Eric Campbell to justice. And of course, he does that in his own unique and hilarious way.

REMEMBER WHEN? (1925): Harry Langdon follows his heart, like many stupid young men. He runs away from the orphanage and years later is still looking for his lost love when his hobo antics get him a job in the circus. Turns out, his true love is the bearded lady. Pretty funny.

THE GOAT (1921): Buster Keaton gets mistaken for a serial killer in a truly inventive gag, and causes quite a bit of hilarity.

BACON GRABBERS (1929): And of course, we end with The Boys. Laurel and Hardy are debt collectors, repossessing a radio. Of course, much home destruction occurs. And it was hilarious. And I say that even though there was no actual bacon in the movie.

And that was last Saturday in Niles. Next Saturday, we celebrate (if that's the right word) the 1906 San Francisco earthquake, including A TRIP DOWN MARKET STREET shot just 4 days before the quake.

Oh, and looking well into the future, the first weekend in June is the big Charlie Chaplin Days celebration in Niles. Come, check out the new town square (check it out sooner than that, in fact), see all the impersonators, watch shorts during the day and see THE GOLD RUSH at night. For more info, go here. 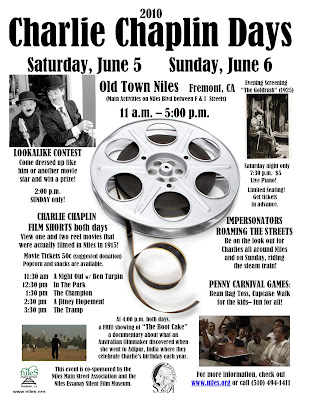 Posted by puppymeat at 6:51 PM