Jason goes to the Hypnodrome for Shocktoberfest '09: THE TORTURE GARDEN

Last Thursday was the opening night/sorta-preview of the Thrillpeddlers newest Shocktoberfest show (BTW, Shocktober is just about my favorite month, competing only with Scotchtober). This was their first time performing this show in front of a live audience, so there were just a few stumbles and missed lines, but not enough to detract from the fun.

The show consisted of two plays, starting with an original story THE PHANTOM LIMB, set in a New Orleans 'house of ill repute' just after the Civil War. Madame du Charmes runs a house that bears no ill will against either side of the war. The war is now over, and the country (or at least her house) is united under one flag--the flag of money. She's an honest businesswoman, taking money from Confederate and Yankee veterans alike. Sure, she had some trouble back in Kentucky, but that certainly won't come back to haunt her. While she employs a team of whores, their services are not always of a sexual nature. They also tend to the wounded, like using voodoo magic to remove shrapnel or scratching phantom limbs. Really, most of their services involve serving "punch" until the customer is too incapacitated to notice his wallet being lifted. Fun story, good payoff, and a surprisingly powerful dénouement in the form of a song. And now that I know the story, I can go watch it again and just focus on the two whores who are always making out with each other [insert "the south will rise again" joke here]

So then during intermission I got a chance to be guillotined. That was a lot of fun. Officially, my capital crime was "being too fluffy": 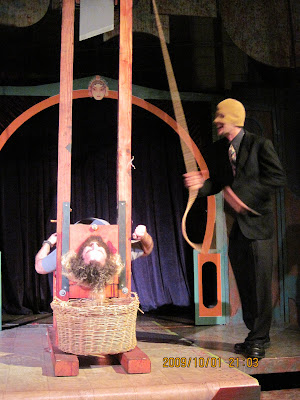 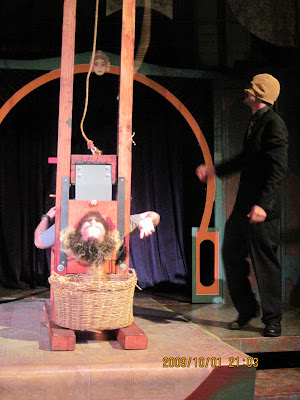 I am proud that I was the only one that night with the guts to go into the guillotine facing up so that I could see the blade. But I completely wussed out and closed my eyes when the blade dropped. Gotta try that again. Still it was lotsa fun.

And then the second show was an old Grand Guignol classic from 1922, based on a novel by Octave Mirbeau which was once described as “the most sickening work of art of the nineteenth century” (woo hoo!) It's an example of "Orientalism", an artistic movement in 1920's Paris that depicted the far East as a savage, ruthless land of endless depravity (I could go on about how in my modern, enlightened view I abhor the racism and enjoyed the show more as an artifact of European attitudes of the time than for the story itself. But that would sound like I'm so in love with the smell of my own farts that I've stuck my head up my ass). Instead, I'll just tell you it's a story of a mysterious, dangerous woman, the man she seduces, the Prince Li-Tong he (sorta accidentally) kills, and a garden where the blood of tortured prisoners feeds the most beautiful flowers. Oh yeah, and there's rebellion, politics, intrigue, and death.

This is my first time i visit here. I found so many entertaining stuff in your blog, especially its discussion. From the tons of comments on your articles, I guess I am not the only one having all the enjoyment here! Keep up the good work. Acuvue Advance Astigmatism