Saturday was a grueling marathon day in which I entered the Castro Theater about 9:30 am and didn't step outside once until after midnight.

The marathon started with a program of "Tales From The Archives". Fascinating pieces of film restoration, starting with Anne Smatla, the winner of last year's post-doctoral restoration grant. She restored SCREEN SNAPSHOTS #7, one of many "behind the scenes" shorts that mixed skits with an inside look at the studio. This one starred Lloyd Hamilton in blackface(!) being treated as a stranger on set until he washes it off and is once again a recognizable star (yikes!)

Joe Lindner and Heather Olson of the Academy Film Archive (mostly Heather) presented the rest of the restorations. The second restoration was Thanhouser's THE ACTORS CHILDREN, a nearly complete "fragment film" with a few frames too badly decomposed to see (although the scenes in general are intact) and the end missing (although the story is pretty close to resolved). An acting family struggles to make rent, and in fact while mom and dad are looking for work they're evicted and the kids are thrown on the street. But the kids are natural dancing hams and
are taken in by an organ grinder. When they prove successful, they're stolen again by the local theater and put on stage. Meanwhile, mom and dad are fantically searching for them, when he gets a telegram that a wealthy relative died and left him $1 million. Eventually they find their kids on stage, take them back and...the ending is missing.

Then we were treated to a Trailer of POLLY OF THE FOLLIES, a film that is otherwise completely lost. Constance Talmadge in her "best, longest, and DOUBLE role" as both a Ziegfeld engenue and as Cleopatra (there's some time travel involved, at least in the imagination).

Then we got into even smaller fragments, as only a few isolated frames were left of the trailer to Coleen Moore's (star of last year's restoration showcase HER WILD OAT) HAPPINESS AHEAD. Not much to say...just a few frames of Moore.

There was another one...that slips my mind right now. Dangit, again it was just a few frames from a trailer to a lost film.

And finally, we reversed the trend with a fully intact Edison short (but one that was completely unknown) HOW THE HUNGRY MAN WAS FED. A poor, starving man begs for coins, but keeps begging the same people. They switch hats and coats and keep giving him coins until know he has plenty of money for food. So they take him to a fine restaurant and fill his belly, then force him to pay up.

Then there wasn't much time to turn the theater over to the next show. First up was a short THEY WOULD ELOPE from the American Biograph company (you can see their logo on set as a copyright protection), directed by D. W. Griffith and starring America's sweetheart Mary Pickford. A young couple in love, but her dad ostensibly doesn't approve. So they decide to run off, and she leaves her parent's a note. Turns out running off doesn't quite work, as they have a variety of transportation troubles, culminating in a capsized canoe. Meanwhile, turns out mom and dad are thrilled their little daughter is getting married, and plan a giant party. They return completely dishevelled after their elopement failure, and are surprised to see a wedding party waiting for them.

And then the feature, another restoration project, BARDELYS THE MAGNIFICENT starring John Gilbert (whose daughter, granddaughter, and great-grandson were in the audience) and directed by King Vidor (their final collaboration). Long thought lost, a print was found and restored by David Shepard last year. It was missing one reel which is filled in with stills and intertitles. The print was found in France and the French intertitles apparently were much different from the original English, which was still available from the MGM archives. Funds have not yet been raised to strike a new 35 mm print, so this restoration was shown on video (BetaSP I think David said, but I could be wrong). Anyway, it still looked great.

John Gilbert plays the titular Bardelys, the greatest lover in all French aristocracy. Such a great lover that his prowess stirs the envy of Count Chatellerault (Roy D'arcy). He has just failed to seduce Lady Roxalanne de Lavedan (Eleanor Boardman), who doesn't spend much time in the royal court, and so isn't much of a liar. When Bardelys mocks Chatellerault's failure at a party, they get into a fight that ends with a bet. If Bardelys cannot get Lady de Lavedan to marry him, Catellerault will get Bardelys's entire estate. It's an outrageous tale that of course involves double-crosses. Bardelys makes it to Lavedan's estate, but is badly injured. Hiding out as the leader of the anti-royal renegades (lucky, since the Lavedans are sympathetic), his "recovery" takes a long time so he can spend more time with Roxalanne. Seduction achieved--almost. Turns out the real rebel leader has a fiancee who writes to him. Roxalanne betrays him to the Royal authorities, where despite his pleas of mistaken identity he's sentenced to death. Carrying out the sentence--Count Chatellerault (Boo! Hiss!) But with a bit of Fairbanksian acrobatics, Bardelys stalls until the king arrives and recognizes him. Chatellarault gets his comeuppance, and Bardelys and Lavedan are married (oh yeah, he had actually fallen in love with her).

The costumes were outrageously foppish, the dialogue was hilariously bawdy (you fight so hard, I'd swear you were fighting for someone else's wife!), and all in all it's a delightfully silly adventure.

Music was again provided by the Mont Alto Motion Picture Orchestra, who were again awesome.


Next up we went to China for WILD ROSE. But first, there was a special first ever SFSFF "Living Legends" award presentation to Qin Yi, the widow of star Jin Yan, and a famous actress in her own right. She spoke briefly about Jin Yan, his charm, and his perfectionism.

As for the movie, it's a beautiful romance and a great look at pre-WWII China. Particularly, Shanghai--the cosmopolitan city of wealthy businessmen from around the world, and the poor people of the countryside just out of town. One of those country girls is the young, beautiful, and vivacious Xiao Feng, nicknamed the titular Wild Rose (playced by Wang Renmei, nicknamed the "Wildcat"). In the opening shot her adoring father is looking for her while she's sneaking around outside to surprise him. She plays general to all the kids in town, leading them as they pretend to march in the army defending China (and the "Do you love China?/I love mommy!" is adorable in any language). Xiao Feng catches the eye of a handsome artist from Shanghai (Jin Yan, who married Renmei after filming, so there's some real chemistry on screen). When her father runs off, (presumed dead, after fighting with a local bar owner who wanted to marry her) she moves to the city with her artist boyfriend. But her country ways displease his father, and when she can't pass for a cultured city lady, his father (and the source of all his wealth) tells him to either get rid of her or leave. He chooses the latter, and for a summer they live the bohemian lifestyle with another friend of his (a failed artist who now paints billboards). The summer is great, but the winter is impossible. In a moment of weakness she steals a dropped wallet. He takes the rap, and she goes to his father to plead for him to help his son. He insists he has no son, until she agrees to go away and never see him again. Only in a romance like this could a war (the Japanese invasion) be a good thing, as he remembers how she lead the child troops back in her village. Assuming she'd enlist for the love of China, he leaps from his father's comfortable house to join the marching volunteers, and finds her immediately. The ending is very abrupt, perhaps the only weakness in this otherwise beautiful film.
The next show started with another Biograph short by D. W. Griffith, THE VOICE OF THE VIOLIN. A weird story of a music teacher spurned by his lovely student Helen. In despair, he joins an anarchist group and draws the short straw for the mission to bomb the capitalist's house. But when he finds out it's Helen's house, he has a change of heart and now has to stop the bomb.

Buck Mulligan. Yup, Bull's got the brains (especially with the help of Rolls Royce, who turns out to be a very well-read lawyer) and the brawn to rule the underworld, but like all good gangsters his weakness is his dame. In this case, Feathers, his gal with a penchant for feather boas. For a time it looks like Feathers might be getting a bit too friendly with Rolls, but the bigger problem is the big underworld party where all the rival gangs call a truce for the night. Specifically, the problem is Buck, who tries to force himself on Feathers. In a drunken rage Bull chases Buck all the way to his flower shop Yup, Buck's cover business is a flower shop, where in the back he's planning an arrangement to put on Bull's grave. But Bull guns him down right there in his shop, and even the king of the underworld can't escape the law on something like that. Stewing in prison (BTW, up to this point, every feature included a jail scene. The theme didn't last), Bull is sure Feathers and Rolls are cheating on him and will leave him to hang while they run off together. In reality, they're plotting to bust him out, but their plot is foiled while Bull breaks out on his own. It all leads to a climactic shootout that rivals anything in modern film, and Bull learns his obligatory lesson. Awesome.Once again the next show opened with a Griffith Biograph short, this time THE TRICK THAT FAILED. Mary Pickford is Nellie, a struggling artist who refuses to marry until she proves she's a success. Her wealthy, handsome suitor Billy hatches a plan to pay his servants to go buy up all her paintings. At first she's thrilled and will marry him, until the trick is discovered and she's so offended that she instead accepts the proposal of his rival (a goofy looking, bald man. Ooh, burn on Billy! BTW, an excellent message that even the ugliest man can land Mary Pickford. I'm sure that helped her popularity)

National Film Registry in 1993. Gish always talked about how this was her hardest film to make, and well in to her 80's and 90's (she lived to be just short of 100) she was touring with this film and others. In those tours the accompaniast was the acclaimed organist Dennis James. For the performance last Saturday, the accompaniast was also acclaimed organist Dennis James 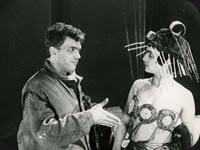 Does Queen Aelita have 3 boobs?
Posted by puppymeat at 8:27 PM