Five more movies on Sunday. Let's get right to it. 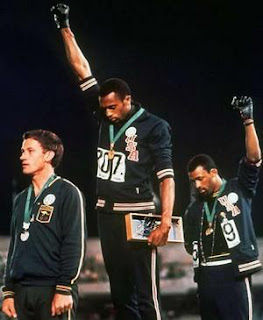 Tommie Smith on the gold medal platform, John Carlos on the bronze, fists raised in a black power salute to protest racism in America. Now look at the white guy on the podium with them. That guy is Peter Norman, Australian sprinter, who had just turned in his best time ever--20.0 seconds in the 200 meters. In any previous Olympics, that would've been a gold medal and a new Olympics record. It is still the Australian record. Now let me point out a few things about this picture. First, along with the raised fists all three athletes are wearing buttons over their left breast. These buttons are for the Olympic project for human rights. Not an IOC sanctioned organization (at the time), this was actually part of the protest, and Peter Norman took part. Another interesting bit of trivia--notice that Tommie is raising his right fist and John his left. That's because 20 minutes before the ceremony, when they decided to do it, they suddenly noticed one of them had forgotten his black gloves back at the village. It was Peter who pointed out if they're each raising one fist, they can share the pair of gloves.

Peter Norman was a devout Christian, raised in the Salvation Army to believe in equality for all. He was not uncomfortable on that podium, he supported them 100%. For his stand, he was mysteriously left off the Australian team in 1972 (they in fact took no sprinters, despite the fact that he qualified for the 200m about a half dozen times). He became lifelong friends with Smith and Carlos, touring and lecturing with them on human rights causes. When he died in 2006, they were pallbearers. He was a funny man, often joking that if the black American athletes had gone through with a proposed boycott, it would have had a profound impact on his life--he'd be a gold medalist! When a statue was erected of Smith and Carlos giving the salute at San Jose State (they were SJSU athletes, and that statue is just blocks from Cinequest) he was left off, as was his wish. Instead, the silver medal podium has a plaque dedicating that spot to Peter Norman, and inviting anyone to stand there if they want to speak out against racism. Peter Norman was a wonderful man, and this is a wonderful movie celebrating his personality and his life. Although really, it's not just about him. It could've easily been title Salute: The Tommie Smith, John Carlos, and Peter Norman Story because they have just as much screen time as him.

Next up was a comedy with the rather lofty goal of defining its generation--the video game generation. Corpse Run opens with a 1989 quote from the CEO of Nintendo, claiming that if video games really influenced kids, they would be eating little pills and listening to repetitive electronic music--cut to a scene of a rave. This is a movie unapologetically about video game geeks. It makes the case that the defining moment of the generation wasn't the space shuttle Challenger exploding, it was the release of Nintendo. It revels in leet-speak, acronyms, and its own gamer language. When they do get together in the real world, no one knows how to speak to girls (even though Brea Grant from Heroes stars as Liberty, a gamer geek chick), and they play capture the flag Sega vs. Nintendo. The film does a clever job of mixing video game style footage in with real life. And oh, yeah, there's plenty of real life in it. Really, I'm not a gamer, and only got about half of what they were talking about. But the life stuff I liked. The main real-life plotline is Nick (writer/director John-Michael Thomas) meeting and falling for Kei, a girl who's into anime as much as he is (but not into gaming). For the first time in his life, he actually doesn't feel like playing video games. Bad for his friends, who are trying to beat a rival team in some World of Warcraft knockoff (okay, I'm not even enough of a gamer to know if the game they're playing is a real or something made up for the film). It's easy to dismiss this as a gamer movie, but it's just as much about not gaming and finding your place in the real world (or possibly replacing the entire real world with a virtual one). It's a coming of age story for a generation that might or might not come of age in time for their midlife crisis.

And speaking of people who are so obsessed with some silly pastime that they never grow up, this happened to be my 100th movie (feature length program) I saw on the big screen this year. Yes, I know March just barely started. Shut up!

Next up was a good old psychological/supernatural thriller, The Skeptic. Timothy Daly stars as Bryan, a lawyer and hardcore rationalist. His aunt just died, and he doesn't get the least bit emotional because a) she never seemed to like him anyway, and b) he gets her big old house. His reaction causes some tension between him and his wife, so he goes to live in the house, although throughout the film everyone who knew him when he was a little boy warns him against it. With good reason--of course it's haunted. Of course, there's no way a rationalist skeptic like him will believe that. The only thing that bothers him is when a will shows up leaving the house to a local college's fringe science program (the professor refuses to use the world "supernatural" insisting what he's studies--ESP, etc.--is completely natural, just poorly understood). But then, when he starts hearing things he goes back to the professor for some answers. One of the more interesting dynamics is how the professor studying paranormal events is a better skeptic than Bryan. When Bryan comes to tell him he's seeing things, the professor admits there's never been a visual event that's anything more than a hallucination. To the professor, it's evidence that Bryan is cracking up, not that there are ghosts. And you know what...that just might be the case. A good story, well told, and exciting if a little conventional. Tom Arnold also co-stars and brings some good comic relief.

And then I saw what might be the toughest movie to "get" in Cinequest--Canary. Alejandro Adams makes it clear early on that he's not going to be making anything clear. For the first 10 minutes you watch a Russian family having a conversation in Russian with no subtitles (I've been told it's a really banal, boring conversation, too). The camera is hidden half behind walls, etc, making you feel a bit like a peeping tom. And in the middle of it all, a mute girl stands watching, hiding (but not very well, it seems like the family just ignores her). She holds a spray can and a small cooler with a heart logo on it. Finally it cuts to one family member lying on the floor (presumably she sprayed him) and she's smearing blue jello on his abdomen. We learn later soon that she's an organ redistribution specialist working for the Canary Corporation. But we never see an operation, never a drop of blood. We learn this through an advertising bull session where executives are throwing ideas back and forth. The key to their business is the "conscientious use" clause in their contracts. Abuse your organ, and you don't get to keep it. You can even have a Canary representative certify your baby's organs at birth, in case they need a transplant later on. Of course, that signs them up for the conscientious use contract, too. This is a world explicated through banal, sometimes bizarre conversations. Canary organ redistribution specialists flirt with the nurses in the hospital. A TV news crew pitches ideas and interviews a crackpot who thinks--for some reason--that Canary might be evil. No, Canary is good. The organs provide life for many people, not just one. And the conscientious use contract is easy to follow if you just by Canary brand organic foods. There's satire, there's allegory, there's banality and acceptance of horrific realities. Reactions I went through while watching this ranged from 'genius!' to 'what?' to 'I think this violates the conscientious use clause for my eyes!' Not an easy movie to watch, not an easy movie to understand, and not an easy movie to forget.

Oh yeah, and all the "Repo!" fans who will see this movie because of the organ repossession angle--ha ha, jokes on you!

And finally, I saw the Russian comedy The Compassionate One. A gruff Russian police officer is in charge of the local drunk tank. He abuses the prisoners with games like the "water game" (place a beer on a table, whoever can make through the fire hose to the beer gets to drink it. When no one does, drink it yourself in front of them). One night a Buddhist monk is brought in. He's not actually drunk, but because he was on the train tracks bowing at an oncoming train and got run over--sober people don't do that. He refuses to say a word, until the officer is going through the monk's meager possessions and grabs a simple little bowl, claiming it's his now. Turns out, that was the former Dalai Lama's bowl, and by claiming it he revealed himself to be the reincarnation of the holy, most compassionate, Dalai Lama. He's got a following now, whether he wants it or not. When he tells his followers to stop bowing to him and get up and go home, his words get twisted into divine wisdom. He needs to get away, so he forces a drunk tank regular to hide him in his little village. Wacky hijinx of course ensue, and he learns that a) being a spiritual leader isn't such a bad thing, and b) maybe, in his own way, he's not so bad at it.

And that was how the first weekend of Cinequest ended.
Posted by puppymeat at 11:56 AM