I know, most people count opening night as "day 0", so this would be "day 1" (first full day of the festival). Well, I'm not most people, dammit! I'm Jason freakin' Wiener! Let's get to the movies!

My day job is...frustrating right now. And I couldn't sneak away in time to catch the start of Shorts Program #2: Temptations. But I have it planned so I can catch up on the first 30-40 minutes of it Saturday night. I'm not sure which film was playing when I snuck it, but it was visually arresting, seemed to jump around a lot, and ended with a woman stuck in a cave. Possibly all that jumping around was her life flashing before her eyes. It looked pretty awesome, hopefully I'll get to see the beginning of it tomorrow. As for the films I saw in their entirety:
"Just Make Believe"--A story of lonely romantics. He's an artist pretending to have money. She's a real estate agent pretending to have a baby. They meet, are perfect for each other, but are both gigantic liars. Pretty engaging, funny, but sad story. Here's a pic of director Jadrien Steele: 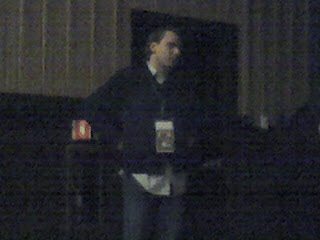 "White Vans"--revenge against bicycle thieves would be sooooo sweet!
"Waves"--surprisingly dark events transpire on a bright day at the beach.
"Flash Lesson"--It's surprisingly easy to be an artist. Step 1: wear all black. Step 2: ??? Step 3: profit.
"Can You Wave Bye-Bye?"--A single mother realizes she's not responsible enough to take care of a dog, much less a baby. She can't even think of a name for her. Better to give her up for adoption.
Next up was Swedish film, "Bitter Sweetheart" ("Linas Kvällsbok"). Of all the underage sex comedies I've seen, this one featured the most vomit! Lina is an average 15 year old girl. She wants to lose her virginity, but hasn't found the right guy. A friend sets her up with Danne, the hunky hockey star who's not really her type. But she goes with him for a while, gives him many handjobs, fakes many orgasms, and eventually goes all the way for his birthday present (I know it's early to start noticing themes, but both features I've seen so far feature birthdays. I guess you can also argue that "Can You Wave Bye-Bye?" featured a birth?). Of course, she's not really into him, but she does like Ivar, the new boy in class. Or rather, in the class 2 years younger than her. Because if 15 year old sex isn't funny enough, try 15 on 13 (which clearly violates the your age/2 + 7 years minimum creepiness rule). But there's a serious moral in here about overcoming peer pressure, being yourself, and chasing your dream. Even if that dream is to nail a 13 year old boy....
And finally, the third show of the night was the Mexican soap opera-esque story of a Mexican soap opera, "It's Better if Gabriela Doesn't Die". Miguel is a writer with big dreams, but currently collecting a paycheck for his work on a third-rate but popular soap opera, "Destiny of Love". One night he's pulled over by a corrupt cop, Bracho, who hassles him about his license being expired and the two girls smoking pot in his car. But when Miguel tells Bracho that he writes "Destiny of Love", Bracho is star struck. He loves the show, and demands an inside scoop so he can brag to all his friends. So Miguel tells him the plan for the end of the season--Gabriela will marry Domenico. And that was the plan. Trouble is, the director Gustavo keeps hitting on Ana, the star who plays Gabriela. She quits in a huff, and the producers decide to just kill off her character (after all, market research indicates viewership rises during a terminal illness). When that plotline unfolds on the show, Bracho looks like a fool and a liar to everyone who bragged to. So he hunts down Miguel and threatens him. A fast paced, hilarious send-up of Mexican pop culture and the notion that writers control anything. It comes complete with a Deus ex Machina ending, followed by an absolutely bizarre absurdist ending (all movies should end with a random filthy guy showing up with an injured bird on his arm).
And that was day 2 of Cinequest. Up tonight, I'm planning to check out "Miscalculation", "Young People Fucking" (oh yeah!), and "The Art of Travel".
Posted by puppymeat at 10:51 AM